Nebbiolo Wines of the Piemonte Region 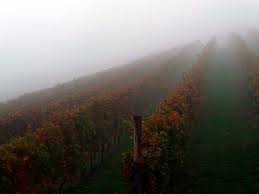 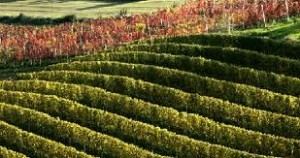 The vineyards of Nebbiolo

Nebbiolo Wines of the Piemonte Region

The Nebbiolo is a lovely black-skinned grape grown in the Piemonte region of North-Western Italy. The name itself is taken from the Italian word for fog; nebbia, which blankets the foothills in October when the grape is harvested. Nebbiolo grapes are essential to Piemonte DOCG wines; among them the Barolo, Barolo Bianco and Barbaresco.
To understand the grape though, you need to know where it comes from. Piemonte proudly boasts 58 wines rated as DOCG or DOC. This region shares a border with France and Switzerland, so the land and its growing seasons are heavily influenced by the Alps and Apennines mountains. The hot, dry summers and moderate autumns and springs compliment the chalky clay soil to give wines made with Nebbiolo grapes its distinctive tannic edge and ‘tar and roses’ scent.
Barolo is without a doubt the most famous Nebbiolo wine from Piemonte. It is one of the three wines originally selected for DOCG status back in the 1980s and is still considered by many to be one of the finest examples of Italian wine. Among some of the best known wines from the district of Barolo are the Collina Rionda Barolo and the Monfortino Barolo Riserva.
Nebbiolo Wines of the Piemonte Region…Barolo Bianco comes from the Roero District which is named for the banker family who controlled the area in the Middle Ages. Although the area is known more for its white wines, the Nebbiolo reds it produces are considered among the most fragrant of the Barolos. This is accomplished by using a small amount of Arneis grapes to help soften the ‘edges’ of the tannins. Matteo Corregia Roero and Barbera d’Alba are some the finer wines to come from Roero.
The Barbaresco District is slightly lower in the hills of Piemonte than Barolo, but even that slight difference in elevation results in a noticeably different product. Barbaresco wines have a slightly more elegant, perfumed style than the Barolos or Barolo Bianco wines. They are also lighter in color than a typical Barolo. This family of Nebbiolo reds began to come into prominence in the second half of the 1900s.
All three wines and districts enjoy a healthy share of the Agriturismo industry in Italy. Touring the wine country has become an incredible source of additional income for wineries and other farmers; allowing them to reopen closed buildings and expand their operations. Anyone interested in wine and its history should make every effort to try and tour the Piemonte region at some point in their adult life. So you must at some point in your life try the Nebbiolo Wines of the Piemonte Region